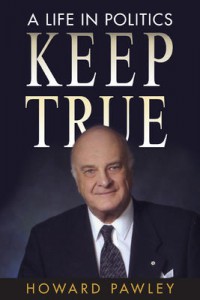 Howard Pawley, OC was a former Premier of the Province of Manitoba and most recently a professor at the University of Windsor. He was also until recently a beloved member of the PIAC Board of Directors.  Howard died on December 30, 2015.
PIAC extends its condolences to his wife Adele and family. PIAC Board members and staff wished to pass on their tributes to Mr. Pawley, which we have collected below.

“A warm, friendly man, Howard “looked you straight in the eye” and listened carefully, as a tribute in the WFP said this morning. Canada benefitted from having such a positive leader in Provincial politics. A Democratic Socialist, he was unwavering in his defence of the principle of social equity, as shown in his successful drive to bring in public auto insurance in Manitoba. Howard was the voice of experience, reason and compromise on the PIAC Board. We shall miss him.” – Harry Gow, PIAC Board Member

“I was very fortunate to have known him as a law student, TA and most importantly as a friend and mentor. In fact, he introduced me to PIAC, an organization he took every opportunity to promote. I will miss him and his kind, principled approach to all he did. My heart is heavy and goes out to his wife Adele, children and grandchildren.” – Krista Devine, PIAC Board Member

“I was honoured to serve with him on the PIAC board, where I got a chance to get to know him, inconceivably, as a peer. But he had impressed me from afar long before that, as a man of great principle, with an uncommon mix of savvy and kindness, and neither being short-changed in the combination.  A truly remarkable man.  I mourn both for his loss – as Canada could sure use more, not fewer,  Howard Pawleys – and for the immense loss borne by his immediate, incredibly lucky family.” – Armine Yalnizyan, PIAC Board Member

“I knew Howard Pawley from the Manitoba NDP in the mid-1970s. We were reacquainted when I met him through PIAC. He was a gentleman and a true Canadian patriot. His passing is Canada’s loss.” – Anuradha (Anu) Bose – former PIAC Board Member

“I was thrilled to be able to recruit Howard Pawley and Ian Stewart at the same time to the Board, shortly after I became [PIAC] Executive Director in 1992. Howard was a rare individual who combined political smarts and strategic thinking with an overarching commitment to social justice. His contributions to Board meetings leavened any discussion, and the interchange between Board members and Howard provided both substance and entertainment for the enjoyment of all. He also added greatly to the national stature of PIAC as an important public interest organization. Like Ian, he will be greatly missed by Canada. We are fortunate that he was able to leave a compelling biography “Keep True” that provides a window on his life and the political history of his times. I feel fortunate I had the benefit of his wisdom and company, and mourn his loss.” – Michael Janigan, Special Counsel, Regulatory and Consumer Affairs and former PIAC Executive Director